The Ritual Landscapes of Murayghat

The Ritual Landscape of Murayghat

The principal aim of the project The Ritual Landscape of Murayghat directed by Dr. Susanne Kerner under the auspice of University of Copenhagen, Department of Cross-Cultural and Regional Studies (ToRS) is to identify the role of ritual in the social and political make-up and development of the late Prehistoric/Early Historical periods of the Southern Levant (Chalcolithic to Middle Bronze Age periods).

Without a strong political organisation, as for instance the Early Bronze Age, rituals would have played an important part in the structuring of life, but in later time periods they would have facilitated communication and cohesion between different parts of a society (individuals, families, clans). The project will study the endangered archaeological site, Murayghat, and examine the date and construction of the dolmen and related structures present at the site.

The Ritual Landscape of Murayghat project is theoretically based in the study of landscape archaeology and the study of rituals. The relationship between rituals and landscape is considered paramount for understanding the site of Muryaghat.

Landscape archaeology is an archaeological approach that looks not only at single structures, but at the structures and their distribution in the landscape in connection with natural conditions (such as wadis, hill tops, view ranges etc.), as well as the importance of human alteration or cultural modifications of the land.

At Murayghat dolmens, standing stones and possibly domestic as well as cultic structures on the central hill transformed the natural landscape into a cultural landscape. The archaeological study of rituals approaches the significance of rituals, whether secular or sacred in nature, for past societies and how these practices may have been expressed in the built environment. 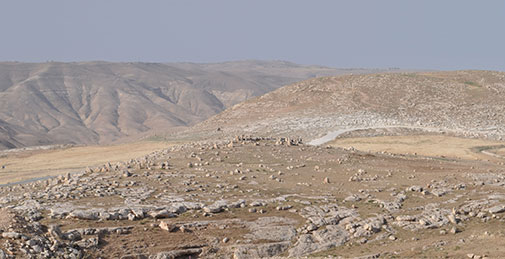 View of the central hill of Murayghat